Like many games, the object of Bowls is essentially simple. It can be played by almost anyone, but to play consistently well demands determination, concentration and practice.

The game of Bowls is played on a 34 to 40 metre square of closely cut grass called the green. The green is divided into playing areas called rinks.  The rink positions are moved and rotated every few days to ensure even wear.

The green is surrounded by a small ditch to catch bowls which leave the green, and a bank upon which markers indicate the corners and centrelines of each rink.

The green: rink positions are moved and rotated every few days to ensure even wear.

Players deliver their bowls alternately from a mat at one end of the rink, towards a small white or yellow ball called the jack at the other end.

The bowls are shaped so that they do not run in a straight line, but take a curved path towards the jack. To be successful the bowl must be delivered with the correct weight, along the correct line.

The bowl can be delivered either forehand or backhand.The object is to get one or more bowls closer to the jack than those of the opposition – one point is scored for each counting bowl.

After playing all the bowls in one direction, and agreeing the score, the direction of play is reversed – the next end is played back down the rink in the opposite direction. 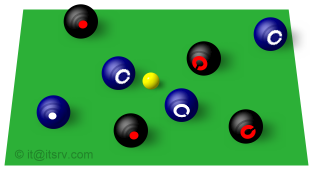 The blue bowls have the nearest bowl, and the second nearest, scoring two. No other bowls count.

Bowls can be played as singles, or in teams of pairs, triples, or fours (a team of four is also known as a ‘rink’). In fours or rinks games, each team member has a particular role to play:

The normal game formats are as follows:

Although these are the most common formats, variations are allowed by the controlling bodies. Matches may be mixed or single-sex.